10 Reasons You Should Not Buy a House in Auction 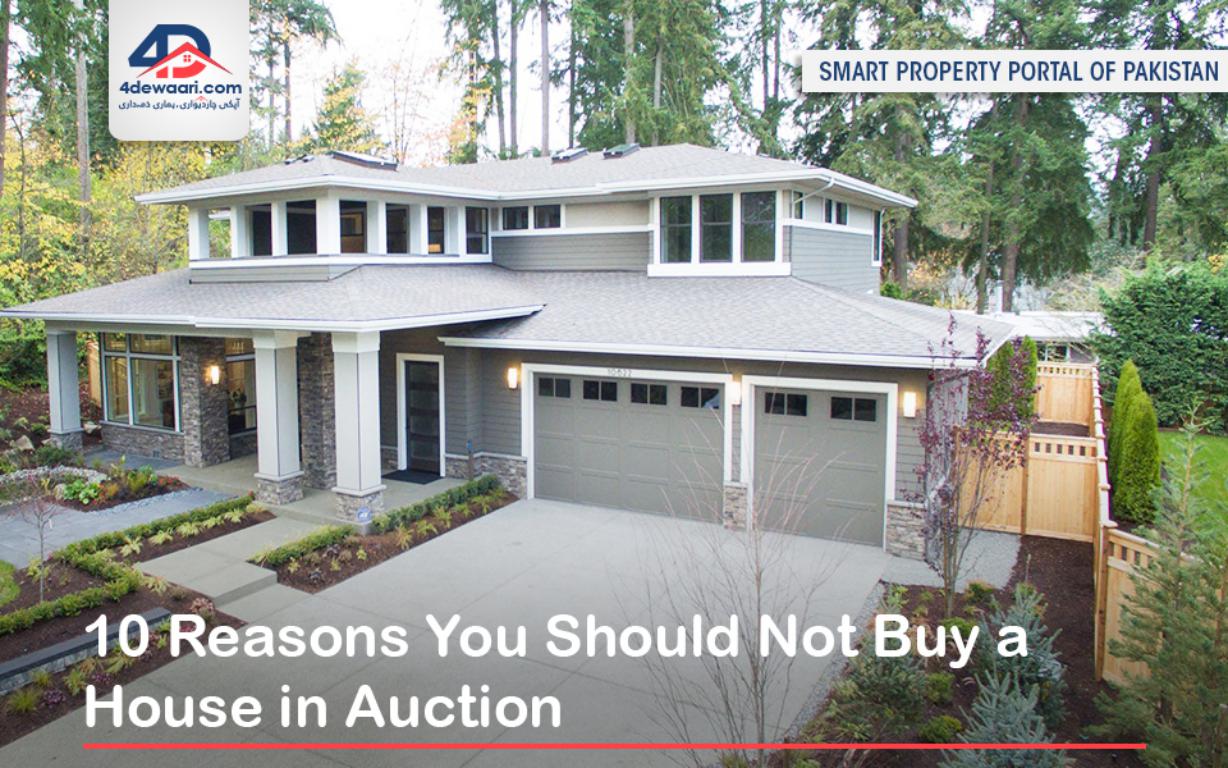 A place that provides you shelter; you are comfortable in; you can breathe freely is your house. The value of a house can only be known to the person who is deprived of his own house. When it comes to purchasing a house, you must exercise extreme caution because frauds have become all too widespread. Therefore we suggest You should not buy a house in auction. There are chances of a good deal in auction but most probably its about taking more risks. Some of the reasons you should avoid buying a house in auction are as follow:

There are chances of losing a bid that simply means that you are wasting your time and money. It’s really common while bidding in any auction that you have to keep in mind that it’s not always you who have to win, it all depends on your luck.

How to Avoid Common Frauds in Property

You would need to pay the money on spot after winning the bid. In case you lose, your amount may be at risk. You need to have the specific amount in your bank, or pay order or cash along with you. Most of the time you have chances of winning a house in an auction but due to a lack of money on the spot or a little bit change in total amount you may lose the bid, which results of failure while buying the house.

You would not be permitted to occasionally walk into the house with an agent as it doesn’t provide same level of access as traditional buyers get. The traditional buyers can visit the house they are willing to buy frequently without any fear of breaking the rules as it is a deal between the buyer and the dealer, but in case of auction it happens so that you have to visit the house according to the laws or rules that are defined.

It could be expensive in such a way that sometimes you would have to pay more than the actual worth of the house because of competition all around. Over budget is common that is not buying a house in auction because while bidding a scenario can occur in which you have a chance to win but due to the competition all around someone can raise a bid that is more than the amount you think due to which it can lead to losing.

Most of the time, the house property that are displayed in the auction is riskier to buy because some of the legal packs are hidden behind it, for that you would need to hire a consultant too before placing a bid.

How to Sell and Buy Property in Pakistan

Such a scenario can occur when someone else who is already bidding for that house might have filed a legal document on it. This can delay the sale of the house up till months and can result in a loan on the property.

If you are new to bidding and auctions thing then you would definitely have to do a lot of research on understanding the legal aspects, the inspection criteria etc. You have a limited time frame and for that, you need to hire people to do research on the house. That research is not only related to the legal work however you would have to suffer a lot to search about the other bidders to have an estimated idea of their bid amount to increase your chances of winning.

There is a limited time frame to decide whether you are going to win that house or not. If you lose, all the worthy time you spent on the research of that specific house is wasted. In most cases for the auction, the time period in which you have to check all the details for the house that is the proper inspection, the legal cases, and getting your finances in order is really limited. Whereas in traditional buying, we do a complete check up that mostly takes more than 2 months, you spend the time and have the option to pay money accordingly in installments.

As the competition in the marketing is increasing day by day, same is the case with the auction in house property. One house can have several biddings due to which the competition is increased and chances to win is reduced. When you are looking for a house other than in auction, you basically have less competitors because mostly it is like this that many of the people don’t know about that if the house is being on sale or not. When others don’t know that you are interested in buying that house you can easily do an inspection. Whenever competition comes, chances of winning are reduced, so you should not buy a house in an auction.

In traditional buying, you have an option to bargain and negotiate and can reduce the price, however in auctions it is impossible. While buying a house or any other thing there are going to be several risks. Firstly’ the biggest thing that is at risk is your money. When you are going to spend a huge amount, you should know that your spending is going to be worthy enough. The chances of buying a worthy house in auction is less. One of the reasons to it is you cannot have talks with the house owner and mostly the houses that are at auction have some legal issues hidden behind it that are hidden by the owner of the house.

Finally, here is our list of potential pitfalls to identify why you should not buy a house in auction and how to buy a house in an auction. Your home is a valuable asset that you have earned through hard work and success. So, before putting your money, time, or efforts on the line, consider the hazards listed above.