All about Minar-e-Pakistan Monument a Detailed Review 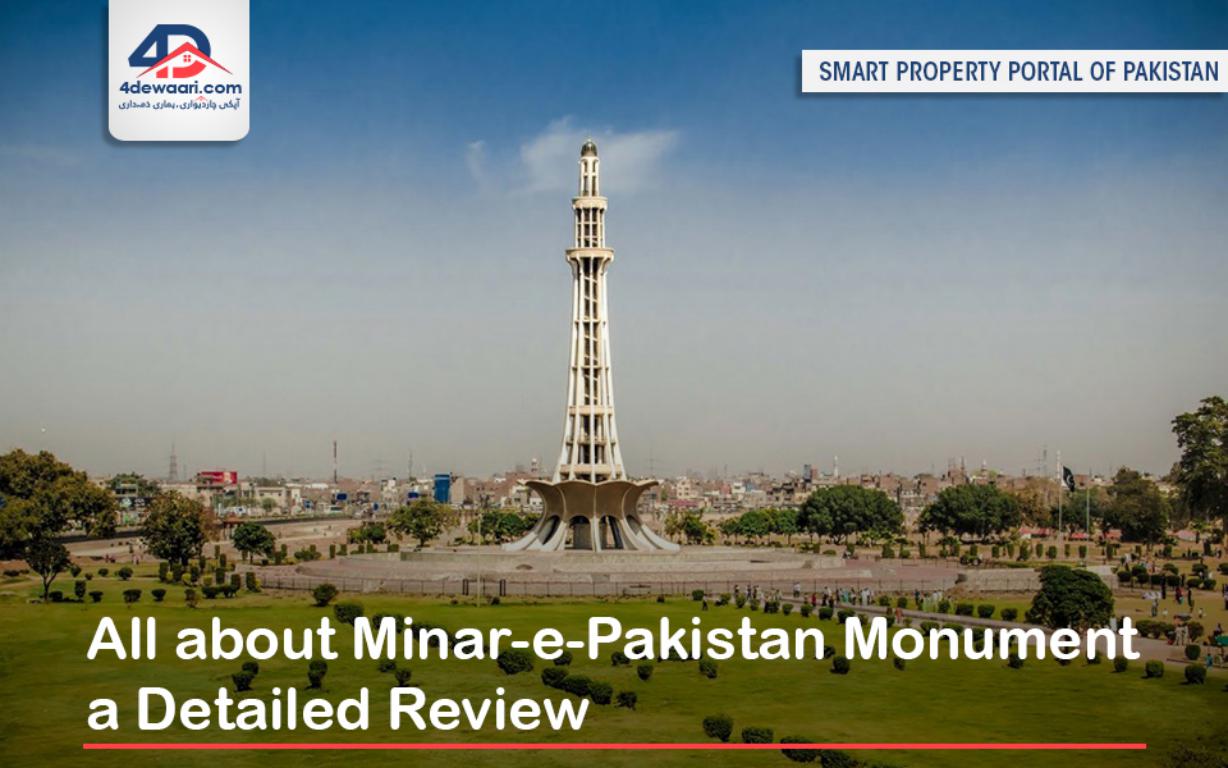 Minar e Pakistan is widely known due to its historical significance. It is usually called as Tower of Pakistan or Minaret of Pakistan. Moreover, it was initially built to pay tribute or show regard, respect, and indebtedness to the famous Lahore Resolution, which was later known as Pakistan Resolution. However, Minar e Pakistan highlights the importance of the Pakistan Resolution which was adopted during all India Muslim league session held on 22-24 march 1940 at the Minto Park (Minto Park is known as Greater Iqbal Park today). As a Pakistan patriot, it is our duty to know about this national asset Further in this article you will get all you need to know about Minar e Pakistan monument.

The historically significant national monument of Pakistan is Minar e Pakistan. It was built in 1968 on the site where the Lahore resolution was adopted by the masses. It was completed in a total of eight years. However, the Minar-e-Pakistan monument was initially demanded in 1960s. As, the then President Field Marshall General Ayub Khan ordered the Nasreddin Murat Khan to make a draft of the monument design and got it approved by him. After that, its main brick was laid on 23 March 1960. Furthermore, for the development of Minar e Pakistan a Council was created by General Ayub Khan which was based on the proposal and plans of the board of trustees. The main individual of the council in this scenario was Mukhtar Masood. However, later on, the monument becomes a source of nostalgia for the hardship, struggle, and achievement of every individual leader who strives for the Muslims of British India on the basis of two nation theory.

The design of the monument is unique and sempervirent in the sense that it is a mixture of Mughal, Islamic, and Modern architecture. The monument was designed by Nasreddin Murat Khan with the assistance of Abdul Rehman Khan Niazi who was a government structural engineer at that time. Through mutual consensus, they included stairs, elevators, and other platforms in the design of the Minar e Pakistan Monument. Moreover, Monument has four major platforms and in the base, the botanical engraving exists. Many scriptures like verses from the Holy Quran and 99 names of Allah are inscribed on it. However, the Lahore Resolution speech also exists in the form of text engraved on the stone wall of Minar e Pakistan. Amazingly, Lahore Resolution doesn’t only exist in one language, it is engraved in major dialects including Urdu, Bengali and Arabic. In addition to all this, it is designed in such a manner that one can get all encircled perspectives of the general city from the top of Minar.

The structure of Minar e Pakistan is flower-like not only in the visual sense but also in the abstract sense because it withholds the smell of all historically beautiful happenings. The structure of minar-e-pakistan drawing is almost eight meters above the ground and extends above almost sixty meters from there. Totally making it seventy two meters tall with certain variations. On its base, the unfolding flower petals exist which are 9 meters high. Moreover, the diameter of minar is 97.5 meter which is practically equal to 320 feet. Moreover, the structure encloses two crescent shaped pools. With the addition of this, its base is shaped like a five pointed star. From there, a staircase is present which is rising up with 162 steps. However, Minar e Pakistan structure is made up of wide variety of things including marble, concrete, and stones. The highlighted portion of Minar, the top dome is made up of stainless steel ornamented with fine glass pieces.

Minar e Pakistan is regarded as the national emblem of Pakistan which highlights the post colonial identity of Muslims. It is significant in the sense that it preserves and protects the Qur’anic scriptures, national anthem, and historical speeches of Muhammad Ali Jinnah and Allama Iqbal by using different languages. Moreover, it is also a resting place of famous poet Hafiz Jalandhari who wrote the Pakistani National Anthem. In addition to this, the Shair e Mashriq tomb is also located in Iqbal Park. Its importance gets enhanced by the fact that it is adjacent to Sheesh Mahal, Badshahi Mosque, and Lahore Fort. However, it also indicates the freedom battle of Muslims. Due to this very reason many political parties hold processions in this area to reinvigorate the lost spirit. Lastly, it also provides a panoramic view and everlasting peace.

Overall, Minar e Pakistan is a unique spirit that Muslims can’t afford to forget and will remember till their last breath due to its historical significances and architectural structure which intensifies the peak and intellect of architecture of Pakistan.