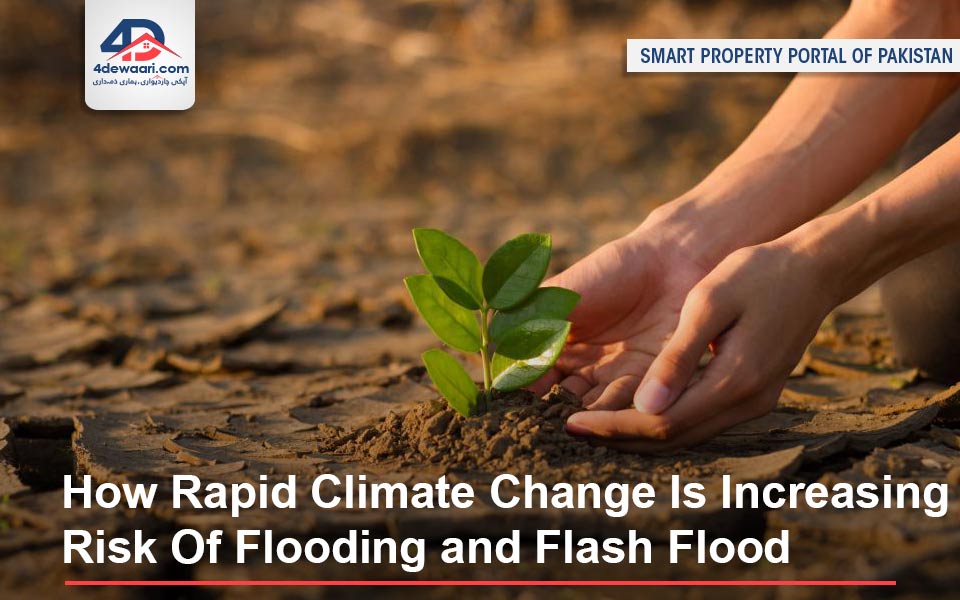 As the climate changes rapidly, many plants and animals are starting to find themselves in unfamiliar territory. They are unable to handle the constantly shifting environmental circumstances. The same holds for humans. We're starting to experience new weather patterns that we aren't well prepared to deal with, like flash floods or hurricanes. According to a World Bank analysis, nearly 70% of the population in danger of flooding resides in South and East Asia. This article aims to overview how rapid climate change increases the risk of flooding worldwide. So, let's start analyzing the increased risk of flooding due to rapid climate change.

What is Meant by Rapid Climate Change?

Rapid climate change means a higher rate than usual of changes in regional or global climate patterns. Rising temperatures, melting ice caps, and more intense storms are some consequences documented over recent years. A warmer planet increases the risk for floods, especially in coastal areas already at risk. According to scientists, due to climate change, millions more people will be at risk of climate flooding in the following decades. Simply put, anyone living near coastal regions with significant populations must take action now to reduce their flood risk.

How To Keep Yourself Safe From Smog

How Can Climate Change Cause Flooding and Drought?

Flooding is significantly and steadily being impacted by climate change. As the planet warms, high levels of precipitation are becoming increasingly common. In certain parts of the world, such as western North America, South Asia, and East Asia, extreme precipitation events have become more frequent due to climate change. Hence, ice caps are melting, and rivers are swelling and overflowing, increasing the risk of flooding. Additionally, melting glaciers in mountain ranges cause landslides that send millions of gallons of water downstream.

There are many causes and effects of flooding due to climate change. Increased sea levels exacerbate coastal flooding. It is due to melting and expanding ice sheets, which in turn results from global warming. These events cause catastrophic flooding, resulting in deaths and injuries to humans and the destruction of property. Floods are becoming more common and severe in Pakistan, India, Bangladesh, and Nigeria. The people here are already experiencing a significant flood crisis because they live in low-lying coastal regions.

All this is due to the rapidity with which our planet is changing. According to a recent Urban Transitions analysis, low-lying urban coastal areas are particularly at risk from severe coastal flooding.

Top government authorities estimate that the latest floods have impacted 33 million people. According to the National Disaster Management Authority (NDMA), 119 individuals had passed away on the previous day, bringing the total number of flood-related deaths to 1,033 as of 28 August. In addition, about 1 million dwellings, 3,451 kilometres of streets, and more than 809,000 acres of farming fields have all been entirely devastated. According to a province-by-province assessment published by the Food and Agriculture Organization of the United Nations, Balochistan and Sindh have been the most severely hit by the floodwaters. In 23 regions, 304,475 and 2.8 million acres of farms were impacted, and in Balochistan and Sindh, respectively, 500,000 and 202,593 cattle died.

How To Stay Away From Moulds In Monsoon

The National Disaster Management Authority has indicated a need for $470 million to deal with these floods, allowing them to rehabilitate infrastructure, reconstruct public buildings and provide financial assistance to the affected families (United Nations Development Programme). Meanwhile, Pakistan's Federal Ministry of Planning says it will take at least ten years to recover from this disaster. We can anticipate increasingly frequent occurrences of extreme weather if climate change is allowed to go on unchecked.

The majority of the country is still affected by monsoon rainfall, which has increased fatalities and property damage from floods, river flooding, and landslides. Forty-eight individuals had been hurt over the previous day, and 28 people had died (most of them in KPK).  Rainfall across the nation as of 1 September is comparable to 2.9 times the 30-year national average. Massive floods and landslides resulted from this, which already have detrimental effects on infrastructure, land, and living beings. Moreover, the nation experienced rainfall in August on average of about 166.8 mm, compared to 48 mm in August of the previous year.

The research indicates that this year's hefty rain in the nation finally led to ongoing flood disasters. However, more information will be required to connect these high river flows and rainfall with climatic changes worldwide. The government is trying to provide aid to the flood-affected people. In addition to this endeavour, the Pakistan Floods Response programme of the UN aims to assist and safeguard some 5.2 million people in Pakistan in the coming six months.

There is compelling evidence that flooding will increase due to climate change. More greenhouse gas emissions, including methane and carbon dioxide, are predicted to diminish the earth's capacity to cool itself and increase the amount of energy radiated into space. It will increase the likelihood of flooding in the areas most susceptible to climate change by heating the atmosphere. Additionally, due to the increased precipitation brought on by the higher temperatures, the air will be able to store more moisture, increasing downpour intensity, regularity, and timing. The planet we live on is warming at about 1.1 degrees C, and the UN Environment Programme (UNEP) predicts that it will only get hotter in the coming years.

More severe consequences, such as more regular floods and droughts worldwide, will result from this.

To sum up, there will be a continual increase in flood risk due to rapid climate change. The intense increase in rain and flooding this year indicates what we expect to see more often. Hence, it will be essential for us to plan and prepare for the worst so that we can lessen our vulnerability to flooding. We can take steps today, like strengthening flood defences and implementing stricter regulations on hazardous materials. But most importantly, we must continue working towards a more sustainable future tomorrow.