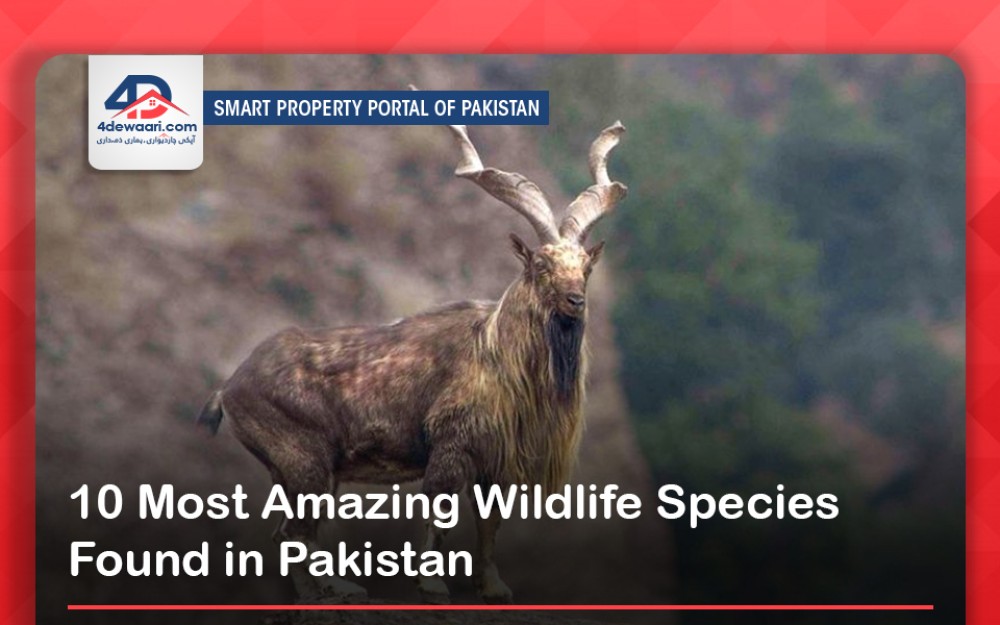 Pakistan is a country that is blessed with amazing wildlife species. The wildlife of Pakistan is composed of diverse flora and fauna in different tropical zones from sea level to mountainous level. Roughly it includes almost 177 mammals and 660 bird species. However, the diversity is due to the drastic climatic changes and mainly due to its location in the national transitional zones between two major geographical regions. In addition to this, some animals are abundant in number while some are endangered species, that seriously need protection. Famous ten amazing wildlife animals in Pakistan are given below.

The national wildlife animal of Pakistan is Markhor. His name is derived from two words, Mar and Khor. Mar means snake while Khor means eater. It is also the symbol of ISI of Pakistan. Another name for Markhor is Screw Horn or Screw Horn Goat. According to the report of English Diaries, the government claims that the average population of Markhor is 5000 to 6000 and it is increasing rapidly. Its habitat is a mountainous region mainly the Karakoram and the Himalayas. They usually weigh between 32 to 110 kilograms. Their diet shifts according to the season. In the summer and spring seasons, they mostly graze while in winter they shift to browsing.

Seconds on our list of amazing wildlife species found in Pakistan is a snow leopard that is also known as an ounce is found in the mountainous region of central and south Asia. The amazing wildlife animal is also present in the northern mountains of Pakistan mainly the Karakoram. In summer, it usually lives in the rocky region, alpine and subclinical zones while in winter, it descends to elevation. The normal weight range of snow leopard is between 25kg and 55kg. However certain male species exceed this given limit of weight. However, the leopard prepares their food by themselves because they are not herbivores. They prefer to pray upon blue sheep, markhor, and wild goat.

The Indus dolphin is commonly called Bhulan in Urdu and Sindhi Dialects. It is also regarded as the special mammal of Pakistan because this is the most amazing creature Indus has been blessed with. This is mainly found in the freshwater of the Indus river. Furthermore, the river is divided into five different areas separated by irrigation barrages. These species are also present there. According to the last survey by WWF, there are almost 1816 species of dolphin found in chasma, tunsa, guddu and sakhar barrage. Moreover, adult dolphins weight is 76kg and they usually live in freshwater by eating carp, pawns and catfish.

Ladakh Pika was formerly called plateau pika because it was not recognized as a separate species at that time. They are short in size having sturdy bodies, big round ears, and invisible tails. Pikas are mainly found in Ladakh or northern mountainous regions where they usually occupy meadows or some prefer to live on a rocky slope. Their weight usually ranges from 1690g to 250g. Moreover, the Ladakh pika is a herbivore species which means they eat grass, weeds, and tall wildflowers that grow in high mountains. That’s why they also save up their food for winter as well.

Grey wild wolf is a specie that resembles a dog (canine) and is one of the most beautiful wildlife animals in Pakistan. It lives mostly in the continents of Eurasia and North America. However, in Pakistan, there are two types of grey wolves. One is the Tibetan wolf which is adapted to northern mountainous regions while the other is the Indian wolf mostly found in Hunza, Gilgit Baltistan and Chitral. They are highly social and always March in groups with their mating pair. Moreover, grey wolves weigh between 16kg to 60kg. Grey wolves are carnivores so they feed largely on garbage, small mammals, livestock and hooved mammals. According to the survey conducted by Mech and Boitani in 2003, only 200 wolves remained in Pakistan.

The most venomous species of cobra is Asiatic Cobra. It is found on the continents of Asia. Moreover, it is endemic and only found in the northern half of Pakistan including areas from Balochistan, Gilgit Baltistan and Azad Kashmir. Moreover, it is a heavy-bodied medium-size species having a length of 5.6ft. Its typical weight is 15 to 20 pounds. Amazingly, they are good swimmers as well, so they mainly depend upon fish, frogs, birds and their eggs for their food and even nutrient requirements. They do not harm humans initially. However, they can get defensive even by facing a small threat. No notable survey for estimating their population has been conducted so far.

Pallas cats are unique in the sense that their name was derived from a scientist named. In Pakistan, they are mainly present in KPK and Gilgit Baltistan where they are first photographed by the wildlife expert Dr Muhammad Kabir park of National Qurumber. Mostly they are adapted to cold continental climates. They have been recently discovered in 2018, so no population count survey happened till now. The average mass of the Pallas cat is 3kg while the length is 57cm. They hold their place among the list of amazing wildlife animals of Pakistan and have a variety of unique characteristics. Moreover, Pallas cats depend upon small mammals for their diet as they are predators.

Bharal is an indigenous wildlife animal in Pakistan commonly known as blue sheep. The normal weight line of bharal falls at 50kg, notably, it’s 52kg. They are mainly found in the inaccessible and far away ranges of the Karakoram in northern Pakistan. It can also be found in areas rich in grass. According to IUCN, they are endangered species because they become the prey of Himalayan wolves and snow leopards. However, their diet mainly consists of grass. But in times of need such as in winter when there is a lack of grass, they quickly shift to browsers.

In conclusion, we must protect all the wildlife animals of Pakistan by avoiding hunting them as they are a kind of national assets and authorities must have to introduce laws for their safety as well.