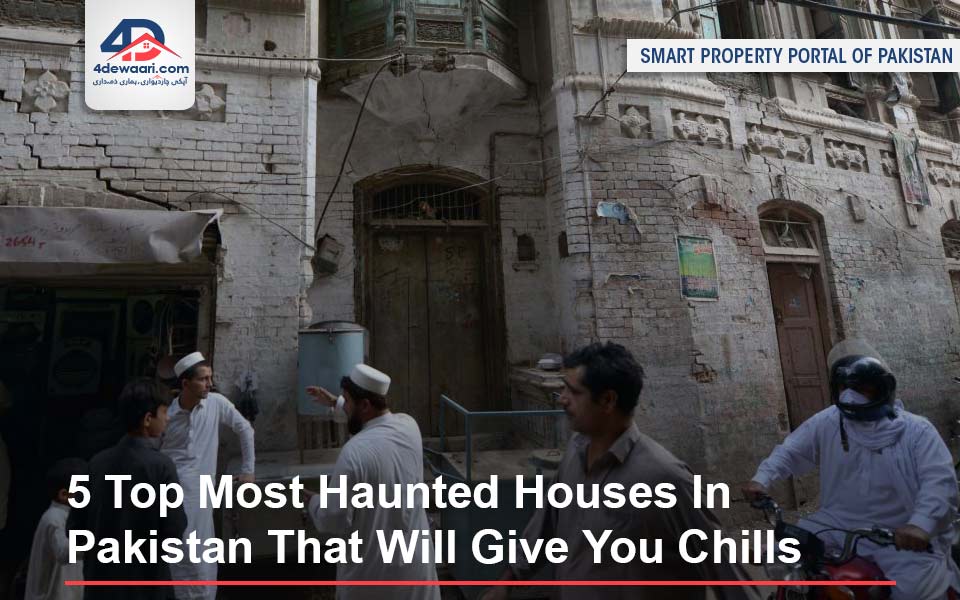 Have you ever had one of those experiences where you get chills up your spine or that feeling that someone’s watching you? You shake it off as just your imagination and go on with your day, but at the back of your mind, you just can’t seem to shake the uneasy feeling. So, if you’re in the mood to be spooked up once again, take a look at this list of the top haunted houses in Pakistan.

Most Haunted Houses In Pakistan

When it comes to haunted places, Pakistan is no different from other countries. There are numerous rumors of haunted houses, hotels, and buildings in the country and all over the internet, you will find stories of paranormal activity happening at these places. Some of them are so terrified that they might even send you back home with bumps in the middle of your head!

Islamabad is a metropolis renowned for its picturesque scenery, lovely surroundings, and hill stations. The city is ideal for living in because of its tranquil atmosphere, and high-quality educational and medical facilities. A few of Pakistan's most terrifying spots are located in the city, though.

It may seem unbelievable, yet these caves are believed to be 700 years old. You feel uneasy because the region is filled with ancient holes and shrubs.Individuals have reported hearing sounds in the caves at night that sounded like many people conversing with one another.

The locals have reported seeing mysterious figures around the area at night. Therefore, if you are an adventurous person and want to feel the eerie atmosphere of this location, make sure to go there during the day because you never know when you might run into a ghost there.

Another scariest haunted place in Islamabad is Buddhist Graveyard. People have reported hearing weird cries, footsteps, and whispers in the neighborhood late at night. Locals report that walking through the cemetery will leave you feeling as though you are constantly being monitored and that the whole location will give you goosebumps.

Lahore is home to many fascinating historical landmarks, but two of them are so haunted by nocturnal paranormal activity that no one dares visit them.

It was constructed during the Mughal era. It was largely used by the rulers of that time as a sanctuary of worship.  However, according to locals, the Pearl Masjid is a mysterious building and many people have reported seeing ominous sights there. People also claim that if you visit the mosque after sunset, you can hear strange noises coming from inside it. Some even say they heard sounds of chains clanking against each other while others claim they saw a figure standing behind them while they were praying at night!

The Z block of DHA Lahore is considered one of the most haunted houses in Lahore. Not just in Lahore but it is popular among people all around Pakistan. We've heard a lot of terrifying tales about this place. There are supposedly a massive proportion of Mythical beings living in those trees, according to folklore. When the trees are destroyed to make room for new buildings, they get angry. After then, they haunt the residents until they are eager to leave the house and sell it!

It is a historical location that features Mughal architecture. Even if it appears attractive in the daytime, it becomes more terrifying at night. The locals claim that they have frequently seen ghostly figures roaming close to the fort and uttering strange in the dark. They also say that some people have heard screaming sounds coming from inside the fort. This place is one of those haunted houses in Pakistan you should not visit alone!

With several haunted houses on its soil, Karachi is, without a doubt, one of Pakistan’s most haunted cities. Imagine walking along these spooky roads at night! If you dare to visit any of these places, make sure you have someone with you for safety reasons. Here are some of Karachi’s scariest haunted houses

Located in North Karachi, it is currently entirely shuttered after both employees and patrons reported seeing paranormal activity within the theatre. Some accounts claim that they heard strange noises coming from vacant rooms and frequent conversation in the rear when no one else was present. Dark things skulk around the borders and creep in front of them. The authorities shut it down forever as a result of these instances. No matter how many times it has been refurbished, people still say they hear strange noises coming from within its walls.

Go see it if you have the courage to!

Imagine you are walking on the road alone at night and suddenly someone taps your shoulder. Nobody is there when you look back. Sounds scary? This is what happens at Karsaz Road. The myth goes that a bride and groom were traveling on Karsaz Road when they were involved in a horrific accident and perished there. Numerous times since the accident, witnesses have seen a woman in a red dress and twisted feet wandering down the street.

The Karachi of today is a far cry from what it was a century ago. The city has grown so much that even its graveyards are now being used for new constructions. One such graveyard is located near National Highway in Karachi and it is called Chowkandi Graveyard. It dates back to the 15th century AD, making it one of the ancient graveyards, according to some historians.

It is said to be haunted by several spirits, including an evil woman who was buried there after her death. Strange lights have been seen emerging from graves at night, and odd noises have also been heard by people. Locals say that if you visit Chowkandi Graveyard late at night, you will hear children crying and women screaming as well as see ghosts roaming around!

So, if you want to travel there by yourself, be careful!