Most Popular Winter Drinks in Pakistan that You Can Make Easily 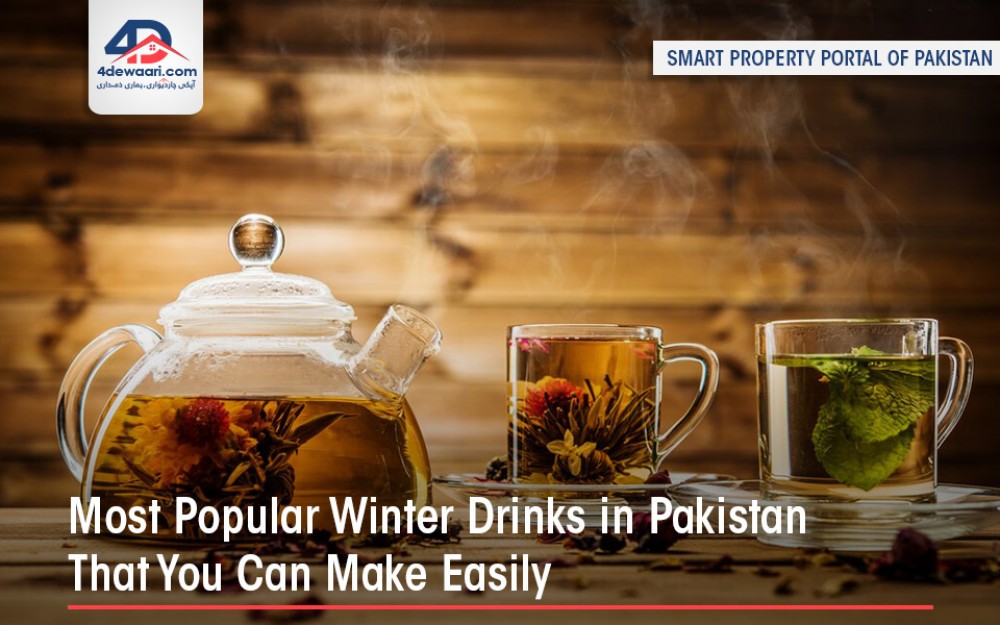 Every season of the year has its own peculiarities and comes with a different set of things from clothes, food to drinks. Different seasons, therefore, require us to prepare and carry ourselves as per the needs of the season. Now, winters are around the corner. Earlier we discussed Tips To Protect Yourself From Winter Smog, and Tips to Keep Your House Dengue Free In Winters, now on the other wide you should also prep up with warm clothing, shawls, and other winter wear, and also bring into account the beverages necessary that would help you lessen the intensity of coldness. Pakistanis are particularly famous for their voracious eatery habits round the year and this season of the year especially brings some of the Best Winter Beverages And Foods that are regularly consumed to mitigate the coldness of the weather. Largely, the diet consumed in winters is based on such foods which help us to keep warm. For this reason, below are some of the most popular winter drinks which are commonly used in Pakistan.

It won’t an exaggeration to say that it is the water alternative for Pakistanis in the winter season. It is an addictive one and also, one of the Most Popular Winter Drinks In Pakistan. If you are addicted to warm beverages such as this (tea), it is easier to make and will keep you warm for a long. You need not find any special cafe or tea stall to find it rather it can easily be made by you. What is needed for this is, use crushed spices like cinnamon sticks and ginger and bring them to boil. Then add tea bags and let your tea steep for about 10 minutes. Once done, it is ready for you to drink, and remember to serve hot as if it becomes cold the essence if vanished.

Originally it is an Arabian drink. It is one of the vastly consumed drinks during the winter season in Pakistan. Qahwa is a Hot Water Drink and is highly popular in Pakistani, especially among the Pakhtuns. It is basically the extracts of an herb and may be used for medicinal purposes. Qahwa is usually consumed after meals and people working in shops and who are exposed to the coldness of the day take it in regular intervals. In tea stalls, you would see people holding mug-full of Qahwas. It has been there as the favorite drink from time immemorial. It only takes a few leaves of Qahwa boiled in water within a few minutes, you have the drink.

As the name suggests, it is the Famous Hot Drink Of Kashmir. Although it is pink in color, this drink is rich in dry fruits such as pistachios. For winter weddings, this is an Ideal Hot Beverage that is commonly consumed in Pakistan almost in every grand tea stall. The ingredients that go into it carry a huge reputation for their effectiveness against the harsh weather and therefore very much liked in Pakistan. Unlike a normal Chai, it has its own taste and value.

Warm Cider is also one of the Drinks For Winter. But comparatively, this is less common among the masses. The recipe is also quite simple that you will need to simmer apple cider with mulling spices, ginger, and orange zest. This will turn out to be a drink that is as good as the smells that arise out of it and it also has a pleasing smell. This does not beat the others in the list in terms of popularity yet it does exist and people do like it as a winter drink.

One of the primary objectives of all these drinks is to keep you warm and cozy. It should serve to lessen the harshness of the weather and make your body warm. To have Hot Cocoa, grind some chipotle and cinnamon to make your drink even more glamorous. This also needs to be served hot. This is also one of the drinks that do not ascend high on the popularity leader yet it does lie somewhere in the middle.

Eggnog is preferred by many and easy to make. This is a pure blender mix and will not waste much of your time. Your drink will be ready in a hassle-free manner within a few minutes. So if you need to keep warm and do not want to mess up your Kitchen Eggnog is your drink this winter. On the popularity graph, it is ranked pretty high owing to its simplicity and effectiveness against the severity of the weather.

The things that keep the chill at bay are your pick for the winter season. As comparatively winter makes you more hungry so why not top up your hot cocoa with a few pieces of marshmallow. Toast the marshmallow a little and then add it to your drink to enhance the flavor like no other. Cocoa And Marshmallows, a drink with a perfect flavor.

In case you want something extra and more efficacious, one way to add flavor to your Hot Cocoa Float is to spice it up with some mint ice cream. All you need is one scoop of mint ice cream and it will turn your plain drink into a winter dessert which you would utterly love. This is a special gift for the winter season that would complement all other measures taken against the chillness of the weather.

Magic Cocoa for the Kids

Kids are more vulnerable to catching a cold and when the adults are having their version of the cocoa why should the kids be left behind. For this, you will need a Hot Cup of milk and some Chocolate Chips, and Cocoa Candy melts. Add these to the milk and stir it up well. Give your child this treat when the winter is in full swing as it will not only guard them against the harsh weather but also the ingredients in it will help their metabolism along with keeping their interest in it as it carries chocolate and candies.

Although, you will be having some Winter-Friendly Foods at home drinks have their own value and efficacy. So, keep yourself warm with these Winter Drinks!

See Also: How To Reduce Electricity Bills In Winters