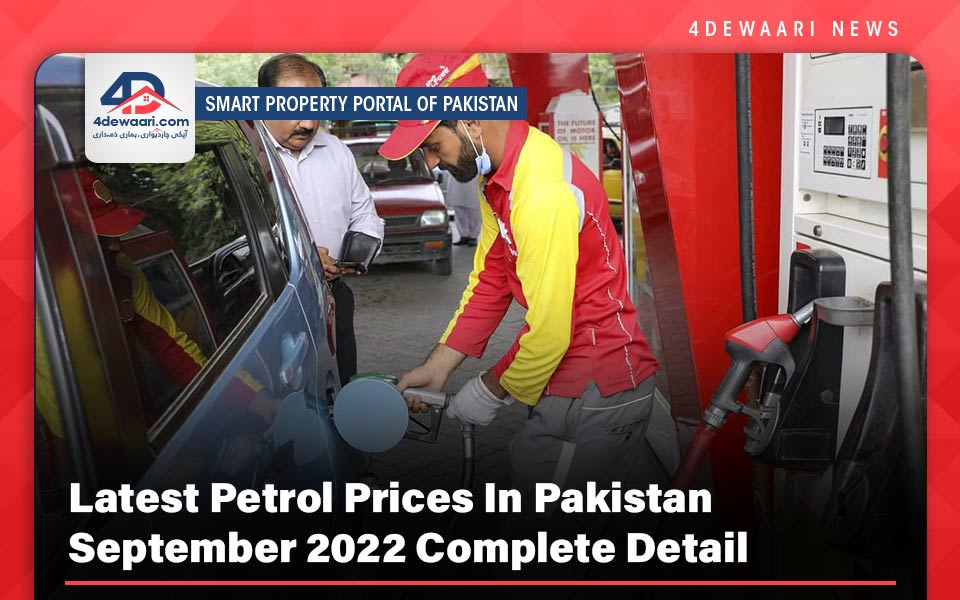 Numerous factors influence the price of oil in a particular nation or area.  The price of crude oil, which serves as the natural source for all petroleum byproducts, the cost of processing, the costs of transportation and marketing, earnings, and gasoline taxes are a few notable elements.  Millions of rupees are given as subsidies by Pakistan's federal government to keep fuel costs stable and help the average person. However, there is still no clear policy in place in the nation for the distribution of fuel subsidies. Let's now examine the most recent fuel costs in Pakistan.
You can see the current pricing for the most widely used petroleum byproducts in the nation, including gasoline, diesel, mild diesel, and kerosene oil, in the chart below.

The Current Cng Prices For September 2022 In Pakistan

In our nation, compressed natural gas (CNG) is another extremely popular fuel used to power cars.
To provide CNG, Pakistan has been separated into two regions:
Region I includes Peshawar, Balochistan, and Potohar districts, including Islamabad, Rawalpindi, and Gujar Khan.
Region II includes Sindh areas and lowland areas of Punjab.
As a result, natural gas prices can vary from one location to another. The most recent CNG prices in Pakistan for both of these areas are provided below.

The worldwide petroleum business was severely harmed by the virus pandemic. The oil and gas industry is oversupplied as a result of the sharp decline in global fuel demand.  In Pakistan, fuel consumption also decreased by 11% during the June–July budgetary year 2019–2020 as strict lockdowns were implemented and the majority of people stayed indoors out of fear of the virus.
In Pakistan, the cost of oil products was at its lowest point in the previous 10 to 12 years. Fuel costs in the nation hit a record low of PKR 74.52 per liter in June 2020. Additionally, several areas of the nation began experiencing fuel issues as a result of the severe lockdown measures.
In the second part of 2020, the number of corona cases fell and the government moved its attention from stringent lockdown measures to wise and more effective confinement regulations. Large-scale businesses and industries were permitted to restart operations while adhering to pandemic SOPs. In Pakistan, the cost of a liter of gasoline increased by PKR 25.58 by the end of June 2020, to PKR 100.10.
The price of petrol in Pakistan in rupees is 235.98, as seen in the table above. Prices for petroleum goods have risen in 2022, primarily as a result of the unstable economic climate and soaring inflation. To stay informed about the changing prices of petroleum products across the nation, continue to check regularly.

Authorities Responsible For Increasing The Petrol Prices In Pakistan

The Pakistani government established the Oil and Gas Regulatory Authority (OGRA) in 2002 to oversee the nation's fuel industry. OGRA compiles a detailed report to advise adjustments to the petrol prices in Pakistan based on the demand, supply, and consumption of numerous other important resources. To find out the current OGRA petrol rates in Pakistan concerning various pump stations, go to the website www.ogra.org.pk.

Cause & Effects Of High Petrol Prices On Economy Of Pakistan

Petroleum is one of the biggest import sources for the Pakistani economy. Oil revenues form a major chunk of our trade deficit and also influence some economic indicators such as inflation and growth.  However, the prices have been surging on an almost daily basis, which has forced the government to cut down on subsidies and duty waivers. With global oil prices reaching new highs over 90.69 USD/BBL, it will be difficult for us to maintain imports without incurring large losses in our balance of payments.
And with both diesel and petrol prices rising steeply, we might not be able to maintain even the current levels of consumption in our economy.
Along with rising gas prices, other factors contribute to high fuel costs. These include the increased price of crude oil in international markets and the depreciation of the Rupee against the Dollar.
In addition, the country's limited refining capacity of about 47,000 barrels per day is unable to meet the demand for its growing population and industrialization needs. As a result, Pakistan has resorted to importing gasoline from China, Singapore, and Thailand to meet domestic demand - but at much higher rates than before. Additionally, imported fuels come with a higher tax burden which is passed onto consumers in the form of taxes and surcharges.

The Ministry of Energy announced plans to reduce dependency on imported petroleum products by focusing more on renewable energy solutions like wind power. To address this crisis, it has begun working closely with solar panel producers to facilitate installation projects across various cities including Karachi and Lahore. Despite these measures, people continue to face hardships due to high petrol prices. There is no denying that if our dependence on fossil fuels continues to grow, then we will experience negative impacts on our environment, society, and economy.

We have covered all the essential details regarding the latest petrol rates in Pakistan as well as the major variables that affect their monthly or biweekly fluctuations.  Petroleum prices in Pakistan are anticipated to increase further in the upcoming months as a result of the nation's unsteady economic situation and the rising prices for fuel on the global market. Moreover, these prices are often different for each part of the country, which means we also need to be aware of how much petrol will cost where we go. But other than that, it's worth noting that the petrol price hikes might make life a little more difficult for those who rely on public transport.