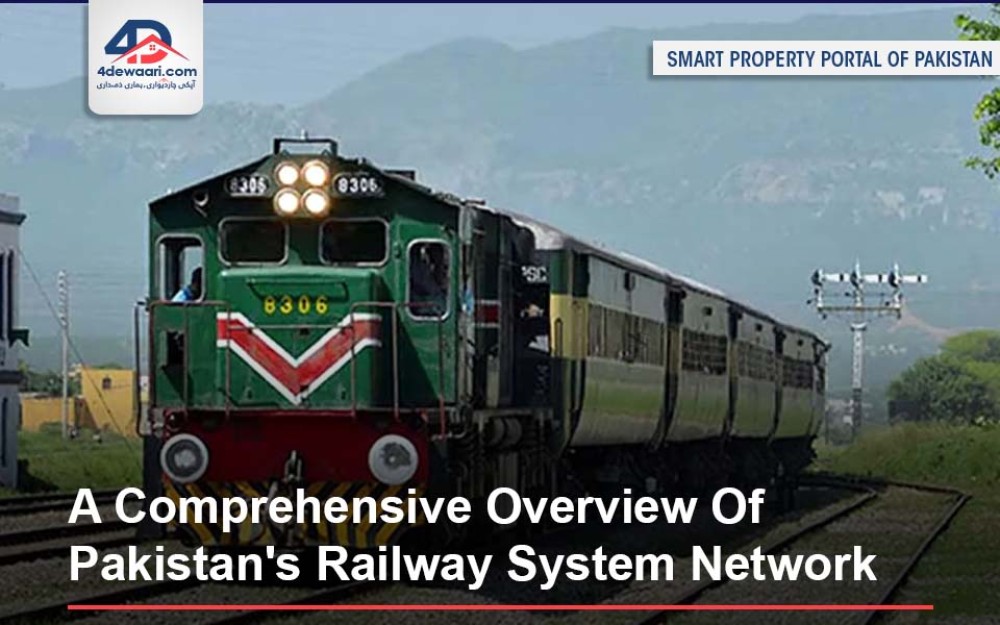 Pakistan's railway system is one of the country's primary and heavily used modes of transportation. It's the third-largest passenger railway network in Asia, behind India and China, and forms an integral part of the national economy. Here's an overview of the railway system in Pakistan, including information on ticket price, timings, popular trains and their routes, and more! However, we will first look at the recent developments in Pakistan railway lines and What is the importance of Pakistan Railway? explain briefly here.

Pakistan Railway Is Going To Be Modernised:

The Pakistan Railways and the Chinese business has signed a contract for $140 million (or roughly PKR 31 billion). The Chinese corporation will give Pakistan 230 cutting-edge passenger vehicles according to that agreement. Forty-six carriages will be purchased as fully built units (CBUs). They are scheduled to arrive in Pakistan from China in December 2022.  The Pakistan Railways would produce the remaining items locally with the assistance of its experts and operational employees under the supervision of specialists from the Chinese enterprise. According to reports, these coaches can travel at a maximum velocity of 160 km/h. A team of Pakistan Railway's technical staff members travelled to China to examine these high-speed coach samples that had just been created. The experts are also examining the contemporary high-capacity cargo waggons. Additionally, the PR team is receiving training in producing and managing this new breed of coaches.

Pakistan's railway system dates back to British colonial times. The North-Western State Railroad widened its reach throughout Sindh and Punjab in 1947, the year of independence. Nearly 8,122 kilometres (5,047 miles) of the North-Western State Railway's train tracks fell into Pakistani jurisdiction after the country gained independence. In the beginning, Pakistan's railway network relied solely on thin rails. Throughout Pakistan's history of railroads, there have been a few occasions when narrow-gauge railroad lines have been converted to broad-gauge ones.
For a smoother flow of rail traffic in Pakistan, all thin railway tracks have been either demolished or upgraded to comprehensive rail systems. The history of Pakistan's railroads has been conserved and exhibited in railway museums in various towns throughout the nation.

11,881 kilometres of railway lines make up Pakistan's railway system. However, about 80% of the rails are a portion of 80- to 90-year-old historical buildings. According to recent figures, the highest speed on most of these Pakistani railway lines is 120 km/h (75 mph). However, the improved parts of the Karachi to Peshawar railway line allow speeds up to 130 kph (81 mph). Additionally, work is being done in Pakistan as part of the CPEC Projects to modernise the main lines. It will enable quicker train speeds of up to 160 kph (99 mph) and lessen the amount of overcrowding experienced by Pakistani railway traffic. Pakistan's railway system is composed of central lines and branch lines. There are now only five primary lines. However, the nation has over 20 branch lines that connect the many cities in the provinces and their territories.  You may find information about Pakistan's essential railway lines in the table below.

The CPEC Projects in Pakistan include upgrading the mainline that connects Peshawar and Karachi. It is a six-year operation with an estimated 6.3 billion dollar price tag.

Khawaja Saad Rafique, the new federal minister for railroads, is now in command of the Ministry of Railways. He has suggested additional train lines for transferring people and cargo between Gwadar Port and Central Asia.

The two main Pakistani ports, Port Qasim and Karachi Port are connected to the country's freight railway transit system. Transport is used to move farming, commercial, and imported goods between coasts and the inside of the country, including sugar, grain, coal, fertiliser, superphosphate, vehicles, gadgets, and various oils.
According to 2018–19, the entire profit of the Pakistani railway sector climbed to PKR 55 billion, which is advantageous for the general economic development of the nation. Presently, the railway accounts for roughly 73 per cent of cargo handling in the country.

How Many Railway Stations In Pakistan

The network comprises 625 stations, 1,043 km of double-track segments, and 285 km of electrified parts.
Popular rail hubs can be found in cities like Islamabad, Faisalabad, Karachi, Quetta, Lahore, Multan, and Hyderabad. Given that Karachi is Pakistan's largest city, three railway stations are located there:
On the other side, Lahore's train station is a fantastic historical site. The government has effectively protected the appeal of this historic building.
Additionally, most of Pakistan's major railway stations have amenities. It includes parking spaces, waiting areas, heritage displays, registration desks with electronic methods, tea shops, and cafeterias to amuse and aid travellers.
Pakistan Railways Ticket

You can access the facility of Pakistan's rail network by going to the following URL:
www.pakrail.gov.pk
With the help of this website link, you can also obtain details about the costs and timetable of the trains you need to take to get to your desired destination. Additionally, you can use this site to compute your round-trip ticket and learn about freight fees.

It's difficult to mention every station in Pakistan's railway system. However, the top 10 railway stations in Pakistan are listed below.

Summing up, this comprehensive overview of Pakistan's railway system was an effort to show that the Pakistani railway system is not as bad as it is portrayed. Although the railways are underutilised and need improvement, some exciting new developments are planned for the future. The most noteworthy among these developments is China's project connecting Karachi with Peshawar. Chinese Railways Group will implement the project.  Moreover, modernisation efforts on the railways will allow more people access to public transportation, which will help alleviate traffic congestion. With all these changes coming into place, I think Pakistan Railways have a bright future ahead of them!