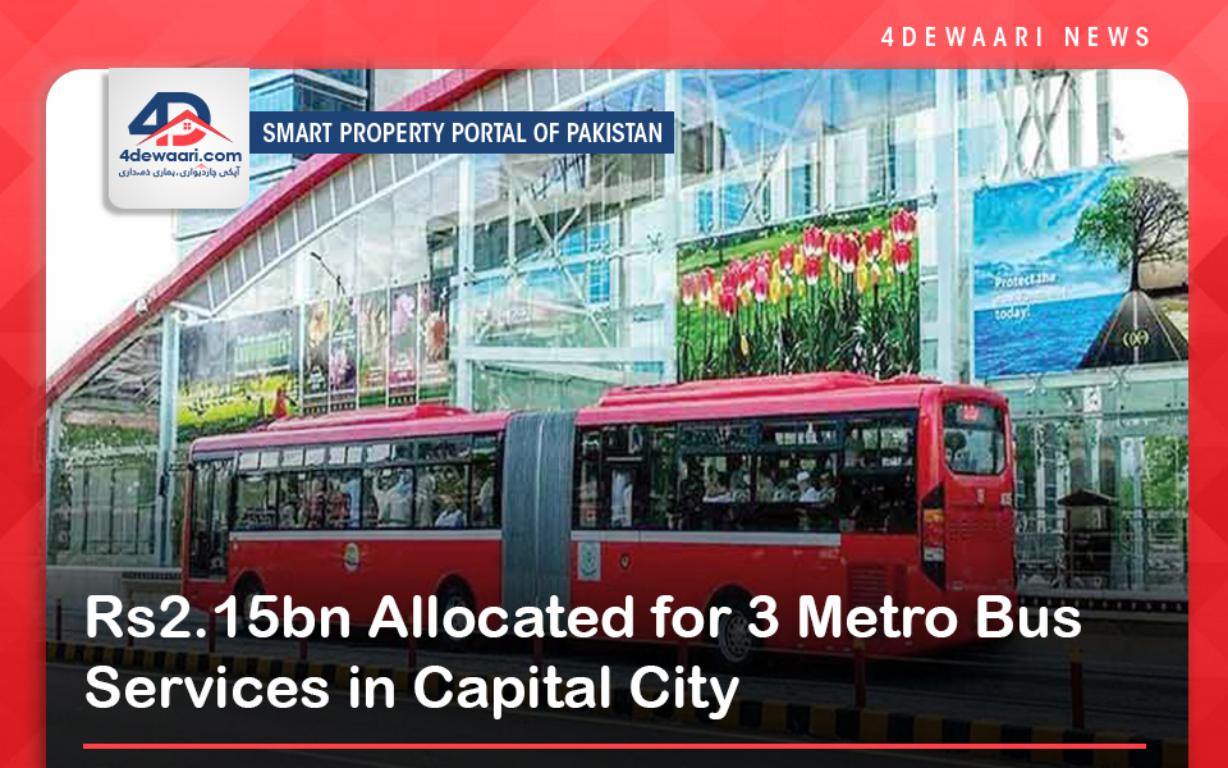 The government has allocated Rs2.15 billion for the construction and execution of the three metro bus services in the capital city namely, Faizabad to Rawat Metro Bus Service, Faizabad to Bhara Kahu, and for the provision of allied facilities to the already operational Peshawar Mor to New Islamabad Air Port. As a major step to facilitate the citizens of the twin cities the govt has allocated Rs 1 billion for Faizabad to Rawat Metro Bus Service, Rs 500 million for the Bhara Kahu to Faizabab Metro Bus Service, and around Rs 300 million for the infrastructure and allied services for Peshawer Mor to Islamabad International Airport. Similarly, an amount of Rs 350 million has been earmarked for the maintenance and management of the metro bus service in the capital city. The incumbent govt has a plan to interlink the twin cities through the metro bus services.

Earlier in March this year Prime Minister Shahbaz Sharif had directed the concerned authorities to immediately start development work on the Rawat Faizabad Metro Bus Service. In this regard, it was informed by the concerned senior official that the work on the said project would start soon. The feasibility study of two main projects namely Metro Bus Service from Sadder to Tarnol and Metro Bus Service from Rawat to Faizabad was carried out in 2017 but due to the political crises followed by a change in the government the projects could not be started. Now the new federal government has decided to immediately start the Rawat to Faizabad Metro Bus Project and Bhara Kahu to Faizabad Bus Project to facilitate the masses in a true sense.

It is pertinent to mention here that over the past couple of decades there has been a rapid growth of settlements and housing societies in the surroundings of the twin cities. These areas include the Bhara Kahu region along the Murree expressway and the areas in the surroundings of the Islamabad Expressway. Similarly, the New sectors of CDA and Housing societies near to new airport have given rise to a great demand for transportation in the said areas. The people from the length and breadth of the country have settled in the twin cities to enjoy better living standards but at the same time, there has been a great rush on the roads. The metro bus service From Sadder to Pak Secretariat is already functioning efficiently, Metro Bus from Peshawer Mor to New Airpot is also partially operational. The addition of the Metro Bus from Faizabad to Rawat and from Faizabad to Bhara Kahu will significantly minimize the woes and worries of the daily commuters.